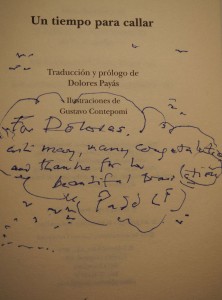 Translation is a literary workout of the highest degree. I would say that translation is to writing what training is to sport.

Demolishing and reconstructing. You dismantle an author’s set piece, only later to rebuild it in a new language. The new voice tries to reproduce the effect of the original voice, but it’s a different voice.

It’s a complex process with a double-edged learning curve.

When an author’s writing is deconstructed, their technique is stripped bare. A good author, a great lesson. A bad one, just as much. You learn to be discerning – good literature, bad literature – based on sound reasons

During the labour of reconstruction the translator plumbs the very depths of their own language. If the original text is rich in literary quality, effort is paramount. If not, it almost ends up worse. The translator stands alone in the face of this danger. He has to make use of his own resources (without the support of the original author). As the interpreter of the work, he too put his name on it, endorse it. If it’s badly written, the readers will look to him first before the original author.

My first translation. I worked my fingers to the bone on it. I carry it with me in my little translator’s heart. The text is a gem and I was the one who suggested the book to the publisher. Best of all, this work harked the beginning of my friendship with the author. Editorial Elba

The meticulous textile descriptions nearly drove me to distraction. Paddy is a very complex author, even for English readers. Finding his voice in Spanish was every bit a challenge. But to travel with him – literarily – through Greece was a blessing. Editorial Acantilado

A difficult book. I couldn’t stand the narrator, a scandal-mongering misogynist. But with the invaluable help of the publisher – she did the final edit – the book came out astonishingly well. A great lesson (in my own limitations). Editorial Elba

If Roumeli was all description of textiles, here it was landscapes. Another test. With the added satisfaction of having proposed it myself to the publisher. A delicious book. Ed. Elba

The book comprises a range of essays that tackle the issues facing the Galapagos Islands from various points of view. It was a pleasing and interesting job. Proof that any subject, well told, can become captivating. Calouste Gulbenkian Foundation

An all-round pleasure being able to delve back into Patrick Leigh Femor’s universe. An exercise in nostalgia as well, as Paddy had already died when I worked on this. RBA Editorial

One of my more enjoyable translations. The story of the kidnapping of General Kreipe as told by “Billy” Moss, comrade in arms and mischief to Paddy. Once again I proposed the book to the publisher. Their acceptance was cause for many a toast and party in Greece. Ed. Acantilado

A hilarious translation; I remember working away and roaring with laughter. The author’s latent sarcasm

and his cold manner in depicting nonsensical situations gave me no small amount of entertainment . Ed. Acantilado

A very intense and difficult translation. The original author presence was omnipotent, I nearly could feel his breath in my neck, as if he was watching me, pushing me. It was a stimulating challenge. A complex work, bristling with traps. Assouline is a first-rate writer, solid and not at all complacent. Navona Editorial